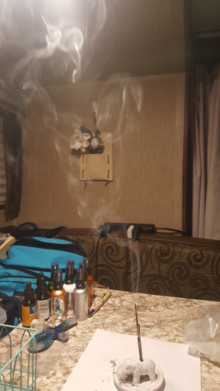 Today I woke at 7:30 pm and turned on the generator to make coffee and to work on my future Chakradance class.  I took a shower, replenished the water and decided to spend a day in self care.  I took a walk around the loop and spoke with the camp hosts.  They are a very nice couple from Minnesota who winter here until February serving the needs of the campers that use this park.  I reviewed my few days here alone, even though I had spent some time socializing with our friends, and said prayers and intentions for the rest of our journey.  I had a great lunch and realized that I was really looking forward to Joe's coming here.  One last test was that our gas well was not putting out any gas (probably a frozen line.)  I spoke with Joe about 2 hours before his flight was due to depart and he was working to resolve the issue.  Since temperatures were still below freezing in Ohio (which means the well would not be putting out any gas any time soon), he had Angie go out and buy extra electric heaters to put in the bathrooms so our plumbing would not freeze.  He made ti to his flight on time.  There seemed to be no value added in trying to solve the gas well situation so he continued his plans to come to AZ.   While he was 30,000 feet in the air, I decided to do a Spa day and went to enjoy a manicure and pedicure.  It was so refreshing to indulge in some TLC.  Joe had sent me his requested grocery list and I went to Whole Foods and a local grocery store to replenish our food supplies and add his choices.  The information that I had said his plane would be landing 15 minutes early.  I was right on time but his flight was not. I had just gotten to the cell phone lot when he called to say he was ready to be picked up  As I drove up to Door 3 on the north side of Terminal 4, I saw his profile.  My heart was so joyful!  12 days we had been apart.  And now here he was in the flesh.  He put his luggage in the back seat of the truck and we were on our way.  We made it back to the campsite about 8:30 pm.  He unpacked, settled in and I explained the routine I had set up with no water and only electricity from the generator.  With a few adjustments we were back in sync like we had not left each other's side.  We went to bed around 11 am and talked about our plans for the next day!  Sleep came easy this night!