We were up at 9 am.  We had our coffee and then headed out for a hike on one of the trails at Lost Dutrchman State Park as we had been so busy with family that we were not able to take the time to enjoy all of the beautiful nature that surrounded us.  We hike up toward the Superstition Mountains for about a mile.  Since check out was noon, we wanted to be back to vacate our site by then,  When we arrived back at 11:45 am, the camp host was waiting to prepare it for the next camper.  We had already hooked up, so we hustled to do a last minute walk around to prevent anything from being left behind.  We bid our great temporary home a last good bye as we drove on to our next adventure.  We stopped at a local grocery store.  Joe went in to find his yogurt to restock his supply.  I waited outside in the truck and camper. As I was sitting there, a man and two women were looking at our rig.  They kept pointing and gesturing.  I rolled down my window and asked if there was anything wrong.  They said no, that they were just admiring our setup.  They currently had a bigger camper and were interested in our experience with ours.  I invited them to take a look inside. They eagerly agreed.  They were from Washington and had plans to winter in Phoenix.  They were looking for a different RV than what they had.  They thanked me for the tour and wished us a safe journey.  I sat in the Fire Lane for a few more minutes, wondering what was taking Joe so long.  A security guard asked me to move.  I notice that the door to the camper was open and I asked the guard to close it.  As he went to do so, Joe walked out.  Somehow I missed him coming out of the store and going into the trailer to put the yogurt in the refridgerator.  We laughed at how he almost went for a ride in the trailer.  Soon we were on our way to Lake Havasu.  The expected travel time was 4 hours.  We stopped half way to fuel both our bodies and the truck.  We arrive at Havasu City around 5 pm, after the office was closed.  The road in the campground was under construction and we had to detour through a private gate (it is for the Park Rangers living quarters) and eventually we found our site for the first night.  We had a second site on the beach for the remainder of our stay.  Joe agreed to back in this time, also.  We settled in for the night.  We were so grateful for electricity.  Temps were in the 50's that night.  Joe had brought his second monitor and we were able to watch streamed episodes of our favorite TV shows.  It felt good to relax and we got to bed somewhat later this night. 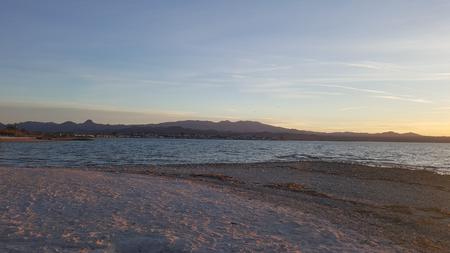 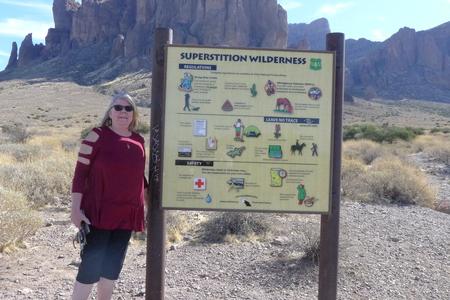