I awoke quite refreshed at 8 am.  We had quite the converstation as I was able to contribute instead of relying on Terri to fill in the silence.  We told story after story of our journeys and changes in our lives that we had made.  We were able to find common ground in our beliefs and came to a better understanding of each other's world.  By 11 am we realized we needed to get on the move as we had a lunch date at 12:30 with niece Julie, daughter Mallory and friend Anna.  As we plugged in the restaurant destination into Google maps, the hours popped up as not being open until 5 pm.  I texted Julie and informed her of this new information.  Oops! After several texts, she found a fabulous restaurant called Chef's Market.  We arrived within 2 minutes of each other, found a table and proceeded to have a 2 hour marathon catch-up.  Mallory was excited to share about her upcoming May wedding and Julie received a call about a job interview the next day for her dream job.  We recruited friend Anna's dentist (who was at the table next to us) to take our group photo. Julie left to do errands, the girls went to complete wedding tasks and Terri and I decided to go to the Grand Ole Opry Hotel to take in the indoor gardens.  Travel time was 31 minutes and we were excited to see this local attraction.  But to our disadvantage, Donald Trump was also due to arrive to address the Farmer Association at the same  place.  As we pondered that option, the travel time lengthened and the roads were closed.  Strike 1.  So Julie had suggested that we might want to see the Parthenon, a life size replica of the original that also is an art museum.  When we called, we received the information that they were closed on Mondays.  Strike 2.  We also needed gas, so after accomplishing that feat, we pulled into a parking lot to consider our options.  I suggested that I had wanted to see the movie 'Wonder".  We found a theater within 20 minutes that started at 3:00 pm.  When we arrived there was no one a the ticket booth and we were about 10 minutes after the start time.  So we walked into the theater and intended to pay after (which we did).  Home run!!  This is such an uplifting movie portrayed from all different perspectives about one little boy's life.  Take tissues.  The tears are joyful.  This is a great artistic portrayal of embracing life with courage.  We came back to the camper and were reflective of how we had navigated some of life's challenges.  Sleep came later this night.  We were at peace. 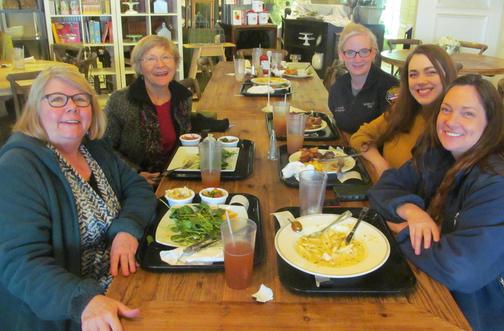